Early Signs of Stabilisation in the Australian Economy

Following from the first round of JobKeeper cuts and the most significant Federal Budget since World War II, CreditorWatch’s Business Risk Review for September reveals signs of stabilisation in the Australian business sector.

The slight rebound in business default and administration figures suggests that some of the so-called ‘zombie businesses‘ – those reliant on government support for survival – are waking up to the reality of their situation and shutting up shop. Overall though, defaults and administrations have shown long term decline.

However, there was significant variance in external administration numbers between states:

Credit enquiries on the CreditorWatch platform, a live indicator of business activity, dropped 6 percent in September compared to August, after four months of positive increases. However, enquiries were higher on average over the past four months compared to the previous eight, signifying that businesses are trying to remain active.

Thoughts from the CEO, Patrick Coghlan

“Seeing businesses enter into administration is never something you want to celebrate. However, September’s increase in default and administration rates does indicate that some businesses which have been reliant on government support are starting to accept the reality of their situation and are taking steps to settle with their creditors.

“What we don’t want to see is businesses that are doomed to fail continuing to operate and taking healthy companies down with them. The long term-trend is that zombie companies will continue to survive on government support and so the next six months are crucial in determining what position we start our economic recovery from”. – Patrick Coghlan, CEO, CreditorWatch.

Considered to be a key indicator of business cash flow, average payment times were down 10 percent across industries in September, with 11 of 19 industry groups recording a decrease in the number of days it took to pay bills.

The figures remain high, however, up 222 percent year-on-year on average. 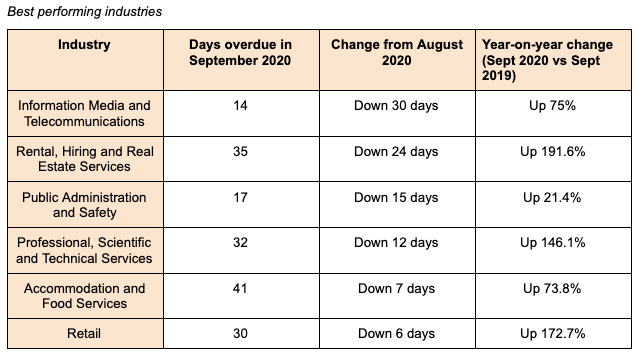 “For a signal of how Australian businesses are faring, payment times provide a glaring picture of how tough the environment is, especially when juxtaposed against 2019. It is encouraging to see big declines in many sectors, such as IT and Telecommunications and Real Estate because when companies get paid quicker, it puts liquidity back into the economy, enabling firms to plan, invest and grow.

“However, payment times still remain too high and some sectors are being particularly stubborn, such as the Financial Services and Insurance sector, which jumped up in September, and the Transport, Postal and Warehousing sector, which remains at a staggering 90 days. As government support is rescinded, which way this metric tracks will be crucial in determining how well Australian firms fare in our new economic world.” – Harley Dale, Chief Economist, CreditorWatch 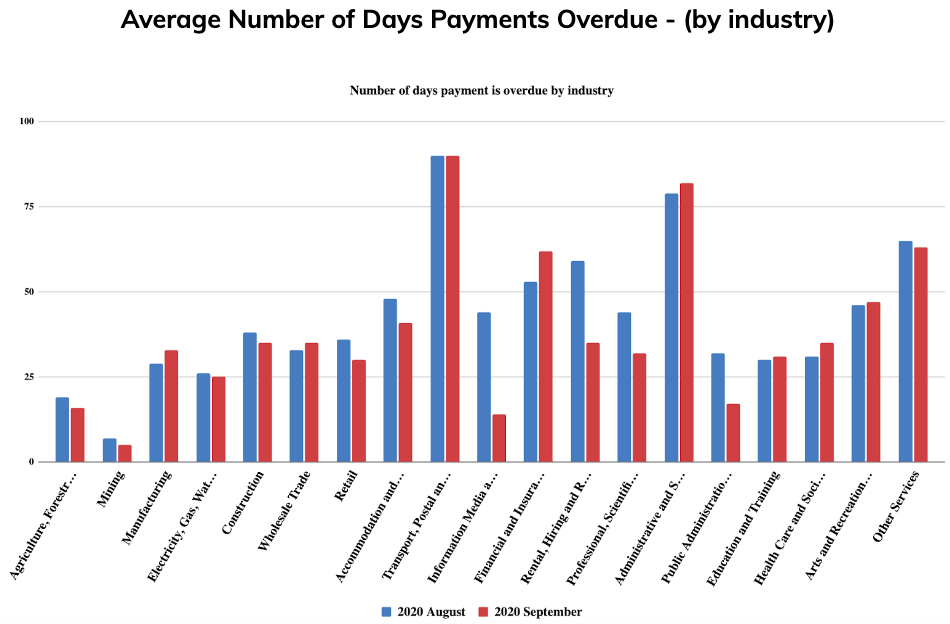 The end of the year is approaching as we come to the end of another quarter. Take a look at how COVID-19 has impacted the numbers in the September quarter.

Welcome to the CreditorWatch blog, here you’ll find articles and news for all things business including quarterly risk updates and tips from industry experts.